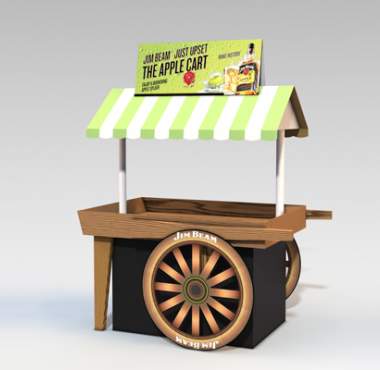 BATAVIA, Ohio (AdAge.com) -- Price discounting is seemingly the one sure thing in an economic downturn, but research by WPP Group shopper-marketing agency OgilvyAction indicates it's still not as effective a sales tool as that old stalwart: in-store displays.

Research OgilvyAction conducted with more than 6,000 shoppers across multiple channels in the U.S. in February and March indicates far more impulse purchases are driven by tactics like those low-tech cardboard retail displays found at the end of aisles rather than temporary price reductions.

And while that survey came before the economy turned much worse in September, research in the past month by the agency for a snack-food brand at convenience stores had similar findings -- in fact, store displays drove nearly twice the number of impulse purchases as price reductions.

Specifically, OgilvyAction's research from the spring indicates that 29% of U.S. shoppers impulsively buy from categories they didn't plan to when they entered the store. Of that group, 24% said they were influenced by secondary store displays (away from the product's usual aisle), 18% by in-store demonstrations, and only 17% by price promotion.

The study also found 39% of U.S. shoppers have a category in mind but pick their brand in store, and of those, 31% were influenced by in-store displays and demonstrations -- more than the 28% by price promotion and the 27% influenced by some other form of consumer promotion.

In each case, however, more than twice as many consumers said they bought impulsively because of display or some other form of promotion as said they did so because of price.

Hard To Resist In Store Displays

The convenience-store study found an even larger share of impulse purchases were driven by display -- 49% in the case of the snack brand in question -- than the broader study taken months earlier, but no additional lift for price-driven decisions.

"We know price promotion will always be in the picture for any shopper," said Jeff Froud, senior strategic planner with OgilvyAction. "They will always say they don't want to feel like they're getting ripped off." But he said the research also indicates displays or other in-store promotions without price reductions can work.

Realistically, the two don't often happen in isolation. Especially in a recession, retailers are likely to demand funds for a temporary price reduction in order to authorize a display, Mr. Froud said. He just hopes manufacturers can use the data to try to convince retailers that both sides can fare better without as much price promotion.

OgilvyAction CEO Rick Roth said marketers can still convey value in stores without doing temporary price reductions, pointing to Kellogg's program with Wal-Mart Stores to highlight the 50 cost of eating breakfast at home, or a program Sara Lee began recently with a promotional tie-in to Disney's "High School Musical 3," which had a secondary message about buying bread and lunchmeat as "a sensible meal solution" compared to eating out.Sunil Garga
Sunil Garga

Marketing-mix analytics long have shown that in store display alone can drive sales without price cuts, though analysts knew of no studies comparing the total return from price reductions alone to display alone.

Price cuts may have hidden benefits
But a recent OMD survey also suggests price promotion resonates more with consumers in a recession, he said, as consumers said they plan to buy as often in everyday or staple categories but will look to trade down. "One way to stop them from trading down is a temporary price reduction," he said.

At the same time, the research showed that in more expensive or luxury categories such as jewelry and vacations, people are more inclined to do without rather than trade down, suggesting price promotion may be of little value. "Price promotion is almost always the worst investment you can make in the long run," said Sunil Garga, proprietor of the analytics firm Mphasize, Norwalk, Conn. But he still expects more of it in the months ahead as marketers deal back recent price hikes in the face of moderating commodity costs and more frugal consumers.